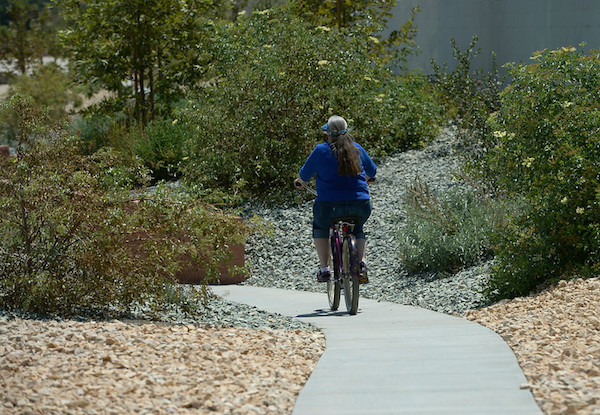 Now it teems with residents enjoying a 1 ¼-mile stretch of parkway that may one day stretch into 51 miles of greenway to the sea.

“Beautiful,” said Donald Yocum, 77, of Canoga Park, who has lived along the river since 1956, astride his mountain bike Saturday. “I’ve been riding this trail every morning at 6:30 a.m. since it opened two months ago.

“The problem was that we had gangbangers breaking glass bottles, leaving trash and graffiti. It’s all gone.”

Where residents can now traipse on both sides of the river from its headwaters at the convergence of Calabasas and Bell creeks at Owensmouth Avenue in Canoga Park to Mason Avenue in Winnetka.

And where specially designed habitats will help recapture and naturally treat polluted stormwater — saving an estimated 587,000 gallons of water a year — while drawing some 300 species of migratory birds.

The greenway has transformed a bare concrete channel into a river garden bikeway that officials hope will someday wind through 13 cities to Long Beach and the Pacific Ocean.

“This provides much needed recreational opportunities for all of us,” said Supervisor Zev Yaroslavsky, to an estimated 100 guests who gathered along the river near De Soto Avenue near Vanowen Street. “For far too long, our concrete waterways have been overlooked.

“We are doing something that we think is important for one generation, but future generations.”

In the planning for nearly two decades, the headwaters project was funded by the county Flood Control District, along with a $1.8 million grant from the voter-approved Prop. 84, a state initiative for improving water systems.

More than 50 such greenways are in the works, including wetlands, parks, bike paths and kayaking programs for the Los Angeles River.

A $1 billion plan to revitalize 11 miles of the Los Angeles River between downtown and Elysian Park was approved in May by the U.S. Army Corps of Engineers.

Officials say it’s all part of a grass-roots effort to turn back the clock and restore nature to the L.A. River while continuing to protect against floods.

At least one resident complained that the greenway stopped at Mason Street — where a half-mile section of developed trails administered by the city has yet to unlock its gates — preventing residents from getting to an L.A. River bike path past Vanalden Avenue. “It doesn’t make sense to have a section in the middle that’s not open,” said Michael Lamb, 46, of Winnetka, who’s been watching the project take shape for years.

But most were thrilled that, after many decades, the barren stretch of trash and graffiti along the river was gone.

“Before, it looked gross,” said Eliezer Brown, 24, of Winnetka, who supplied the balloons for the ribbon-cutting event. “Now I love to walk my dog every evening.”